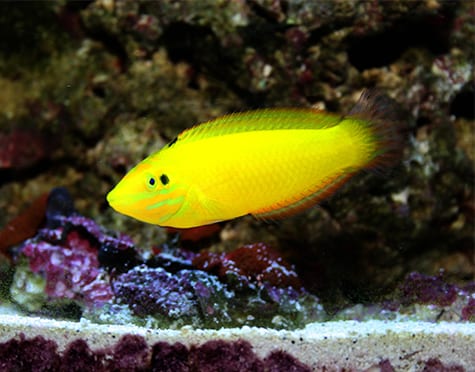 The Yellow Wrasse, also known as the Golden Wrasse, Yellow Coris, Canary Wrasse or Golden Rainbowfish Wrasse, has been classed as having one of the most golden colourings in the ocean and will add colour to any aquarium. Furthermore, these fish are mostly found in the Indian Ocean.

Requirements
The Yellow Wrasse require a 100 litre aquarium with at least a 2 inch fine sand bed in order to satisfy the Wrasse's behaviour of burying itself when sleeping or for protection. Additionally, this fish can be classed as a jumper and it would be a viable decision to make sure you have a lid on your aquarium.

Suggestions
Many hobbyists suggest that Yellow Wrasse are a very peaceful fish and should sometimes be added first when planning to have a tank of more aggressive and dominent fish in order to give the wrasse time to settle. Furthermore, this wrasse will eat fireworms and pyramidellid snails as well as most aquarium pests. Many hobbyists seek to include this fish in their system due to the fact that it can also eat parasites off other tank mates.

Find out where you can buy a Yellow Wrasse near you