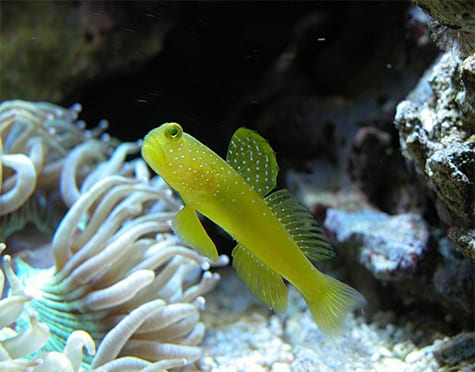 The Watchman Goby is very common within the marine industry and adds a great bit of colour to any marine tank. The goby has a solid yellow colour to its body and has white/blue dots over its fins and head.

Requirements
In order to keep this fish happy and in an environment alike its natural home, it should be kept in an aquarium of at least 40 litres, with plentiful swimming space, a sand bed for burrowing and live rock for swimming between. Additionally, a tank cover is a must when housing this fish, as it has been known to accidentally jump up and fall out of the aquarium.

Suggestions
The goby is a very peaceful fish when they are of a different family or shape, however if housed with another fish of the same family and shape it can show signs of aggression towards it in order to hold its territory and dominance. This fish is very desired in the aquarium industry as its known to form a symbiotic relationship with a pistol shrimp. Many hobbyists have stated that if added together the goby and the shrimp will pair up almost instantly.

Feeding
The Watchman Goby's diet must be fed on a range of meaty foods such as brine shrimp, frozen mysis shrimp, and forms of frozen preparations.

Find out where you can buy a Watchman Goby near you