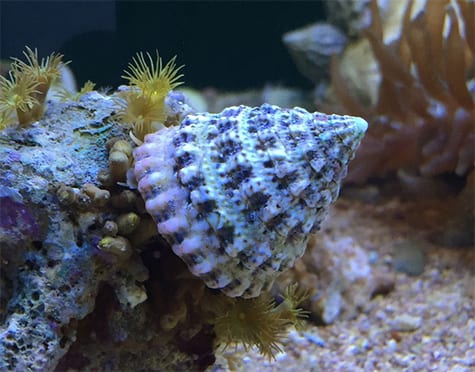 The Turbo Snail is one of the most beneficial creatures you can add to a marine tank as they are key in the clean up crew gang. They host a spiral shaped shell which allows adds a change to the usual hermit styled shell. This snail is excessively fond of hair algae, and is able to eat through a significant amount relatively quickly.

Requirements
This snail is best housed within those well established aquariums since their diet evolves solely around food and algae on the live rock and sand to graze upon. Additionally similar to all invertebrates it would not be in a aquarium with elevated copper levels or copper treatment should not be used on a tank containing this snail. Furthermore, it is important to now house this snail with more predatory fish such as puffers and triggers as they may see the snail as food.

Suggestions
It is also a wise idea to dose your aquarium with calcium in order to allow this snail to maintain a healthy and protected shell. Additionally, when adding this snail to your aquarium it is vital to slowly acclimate them as they can be very susceptible to sudden changes in water parameters and conditions.

Feeding
This snail will most likely be content with eating the algae in your aquarium, but if there is an insufficient amount present then it is important to feed them. They can be fed with a variety of food sources, such as algae pellets.

Find out where you can buy a Turbo Snail near you