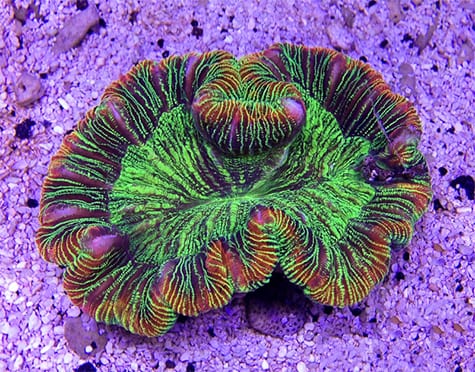 The Trachyphyllia Coral is a remarkable LPS that holds a fascinating appearance usually being a figure eight structure. It also comes in a variety of colourations, all as unique as the next and will definitely bring a flourish of vibrant colour to any marine aquarium.

Requirements
This coral will thrive best in those more well established aquariums that have already built up a base of phytoplankton. It will also require moderate lighting combined with moderate to strong water movement within the aquarium. For continued good health, it will also require the addition of calcium, strontium, and other trace elements to the water.

This coral is probably one of the most spectacular looking under actinic lighting as it is very fluorescent and will most certainly be the talking point of the aquarium. It is not overly aggressive, but space should still be provided between itself and other neighboring corals as it still has the ability to give out a nasty sting.

Feeding
Though this coral will attain the majority of its nutritional requirements from the lighting through photosynthesis, it will also benefit from additional food sources in the form of brine shrimp or micro-plankton.

Find out where you can buy a Trachyphyllia Coral near you