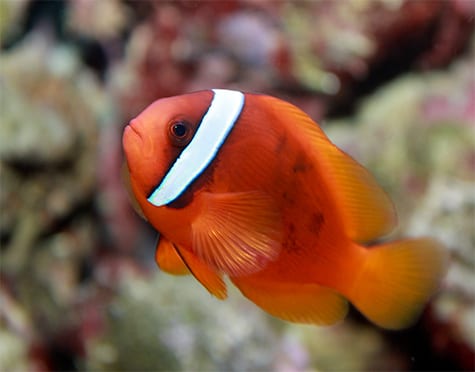 The Tomato Clownfish, can be discovered throughout the Pacific Ocean, and usually in a symbiotic relationship with an anemone. This Clownfish is also commonly known to host corals such as torch, bubble, hammer and elegance corals when there is no anemone present. Tomato Clownfish are usually a deeper orange colouration as a juvenile, but as it reaches an adult form it will lighten to a more brighter orange. Additionally, whilst the juveniles are dressed in three white bands, and black pectoral fins, these will slowly disappear as the Clownfish matures.

Requirements
The Tomato Clownfish is a extremely hardy fish and relatively more accustomed to conditions within a marine tank in comparison to most other fish. Therefore, it is not only a great fish for those novices but also experienced aquarists. Additionally, the Clownfish are able to be housed with a variety of other Clownfish, if they are introduced simultaneously into the tank.

Suggestions
Aquarists have been known to state that the Tomato Clownfish are relatively simple to breed in the home aquarium. The largest Clownfish of the pair will be the female, and the couple will usually shadow eachother in the aquarium. They will usually hatch their eggs every 6-11 days depending on the aquariums temperature, and they will defend these eggs from other tank inhabitants.

Feeding
These Clownfish are aggressive eaters and will thrive on most meaty and herbivore foods.

Find out where you can buy a Tomato Clownfish near you