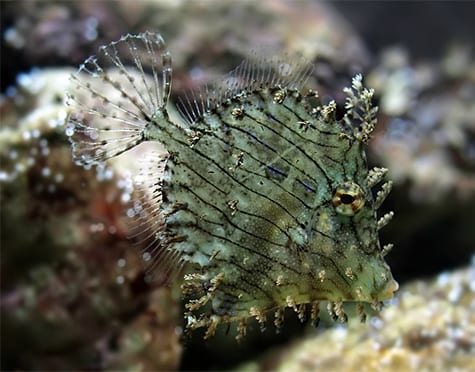 The Tassle Filefish is easily recognisable as one of the most different looking fish in the industry today. It holds a camouflaged body thats usually a seaweed brown/green that consists of black horizontal lines from tail to face. This fish can easily blend in to the aquarium and sometimes become difficult to find.

Requirements
In order to keep this fish happy and comfortable it is best to home it within a aquarium of at least 200 litres, preferably with lots of live rock and non-aggressive tank mates that will not bully it. Some aquarists have had issues when keeping this fish puffer fish and trigger fish as they sometimes see the fish as algae or food due to its unusual appearance.

Suggestions
Many hobbyists seek to add this fish to their aquarium due to their unusual behaviour to eat aiptasia and wipe it from existence within aquariums.

Feeding
The Tassle Filefish will thrive on a varied diet of meaty foods, such as brine and mysis shrimp, as well as other marine foods such as pellets, flakes, algaes and aiptasia.

Find out where you can buy a Tassle Filefish near you