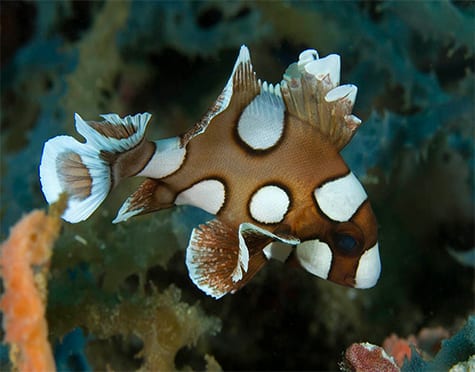 The Spotted Grunt has a unique colour pattern which changes greatly as it matures from juvenile into adult form. Whilst young it holds a brown coloured base on its body with white circle patches and a fanned fins. However, in its adult form it holds a white body with black circles.

Requirements
This fish has been classed as somewhat relatively more difficult to home than other fish, however when done so it is an amazing addition to any marine tank. A large tank is required as this fish as the potential to grow to an enormous 25 inches.

Suggestions
The Spotted Grunt has a peaceful nature and therefore should not be kept with very aggressive fish such as triggers, even though some aquarists have done so without issue. This fish has also been known to, but may not, nip at starfish and clean up crew members, it really is trial and error with this species.

Find out where you can buy a Spotted Grunt near you