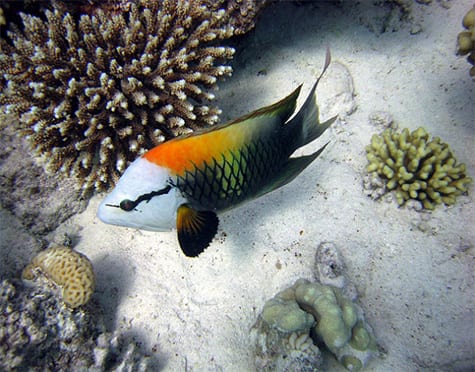 The slingjaw wrasse, is a species of wrasse native to the tropical waters of the Indo-Pacific from the Red Sea and the African coast to the Tuamotus and Hawaii, and from the southern waters of Japan to New Caledonia. This species can be found on coral reefs at depths from 1 to 42 m

Requirements
The Slingjaw Wrasse should be kept within an aquarium with at least 500 litres as it can reach a standard length of 54 cm (21 in).The jaws of this species can swing out to form a long tube when opened (up to half the length of the fish's body) which creates suction to allow the fish to ingest the small crustaceans and fishes upon which it preys.

Suggestions
Many hobbyists suggest that Slingjaw Wrasse may be kept with fish that are larger or more aggressive than it is, but should be kept housed with more passive fish as a juvenile, and should also be kept individually and never with another Slingjaw Wrasse. Furthermore, this wrasse should not be kept in a reef aquarium as it is known to eat invertebrates as it matures.

Find out where you can buy a Slingjaw Wrasse near you