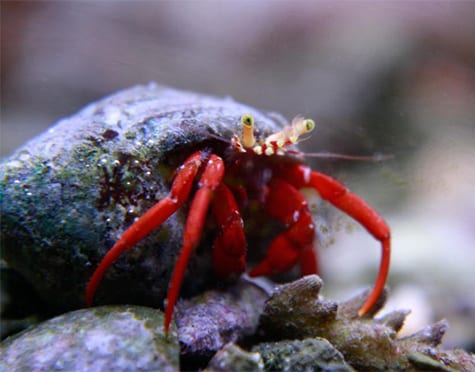 The Scarlet Reef Hermit Crab is probably the most popular hermit crab in the industry as it not only boasts a stunning red colour but is also very hardy and beneficial to a home aquarium. They have an amazing appetite for hair and cyano algae which is usually the reason they are added to a tank. However, they are also relatively peaceful in comparison to their other family members.

Requirements
When housing this crab it is important to add additional shells to the aquarium, otherwise as it grows it may sought to attacking other crabs or snail in order to take their shell. It is important to note that this crab will also not tolerate any copper medications and it will mostly kill it.

Suggestions
Another reason as to why this crab is so highly sought after is that they are an amazing member of the clean up crew family and have a great ability of eating cyano and hair algae, which make them very appealing to hobbyists. Additionally, they provide a service that consistently aerates the sand bed as they scavenge through it, which can be invaluable in stopping nitrate built ups under the sand. Lastly, these crabs are reef safe and can live happily within reef aquariums with lots of corals.

Feeding
This crab will most likely be content with eating the algae in your aquarium, but if there is an insufficient amount present then it is important to feed them. This can be done by offering a variety of herbivore preparations.