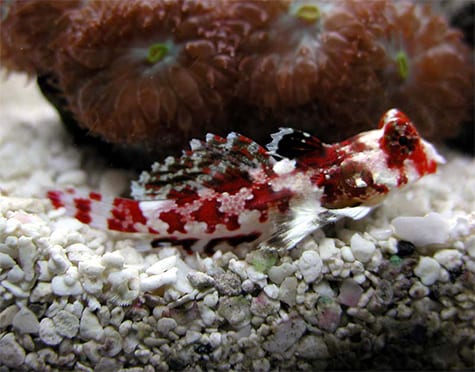 The Red Scooter Dragonet is a amazing addition to any aquarium as it consists of a great colouration and a behaviour unlike most marine fish. This dragonet has a body that consists of red and white patches that form a sort of unique camouflage effect. Additionally, the males are usually more sought after due to holding more vibrant colours and a elongated dorsal fin.

Requirements
In order to keep this fish thriving in your marine aquarium, it is important to firstly have an aquarium of at least 100 litres, preferably with a variety of live rock for hiding within and live sand for scouting across. Additionally, with this species more than one may be kept in the same aquarium. This is done best when all dragonets are introduced at the same time and at the ratio of 2-3 females per male as a rule of thumb.

Suggestions
Similar to its family members, this dragonet will also perch upon live rock, browse upon the sand, hide within caves and continuously be on the hunt for live copepods that live within your live rock. Some aquarists have had great success in adding live copepods if they have had a problem in feeding the dragonet organically.

Feeding
The dragonet may originally only feed on live copepods, however as it begins to settle in, it will begin to feed on brine shrimp and other foods found within the sand and on live rock.