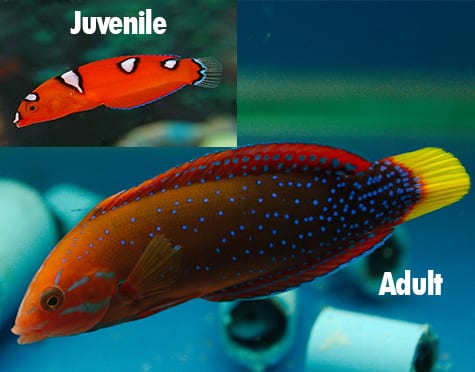 The Red Coris Wrasse, also known as the Yellowtail Coris, Red Labrid or Clown Wrasse, appearance changes greatly when comparing its juvenile and adult colouration. Additionally, this fish can be discovered upon most reefs in the Indo-Pacific and Hawaiian Region.

Requirements
The Red Coris Wrasse has been said to need a 400 litre aquarium at the minimum with a deep sandy bottom to which the fish can bury itself into when looking for protection or sleeping.

Suggestions
Many hobbyists suggest that Red Coris Wrasse can be difficult to keep if held in a aquarium with crushed coral or larger substrate, to which this difficulty eradicates when dealing with a finder substrate like fine sand. Additionally, it has been said that when juvenile the fish is safe with any fish and invertebrate. However once an adult it can move towards eating invertebrates such as crabs and shrimp.