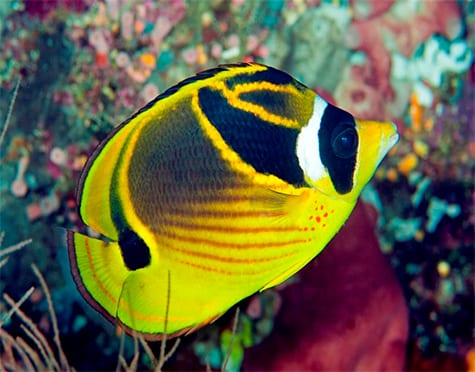 The Raccoon Butterfly achieves its name from its 'Raccoon' styled colouring. It has a yellow based body, which gradients from bright yellow at the bottom of the fish to dark yellow at the top. It also has a black band around its eyes which is also then highlighted by a white band.

Requirements
In order to keep this butterfly happy in captivity it must be kept in a aquarium of at least 400 litres with plenty of live rock for hiding between. This fish is also relatively peaceful and therefore should have tank mates that are like minded, and should not be housed with very aggressive fish. Additionally, this fish may also be harmful to invertebrates and corals.

Suggestions
Many state that it takes a while at the beginning to get this fish to feed due to it being shy and slow. However this can be overcome by trying a variety of live foods or anemones.

Feeding
Once this fish has been acclimated, it should then be offered a varied diet of meaty foods, crustacean flesh, mysis shrimp, and frozen preparations at least twice daily.

Find out where you can buy a Raccoon Butterfly near you