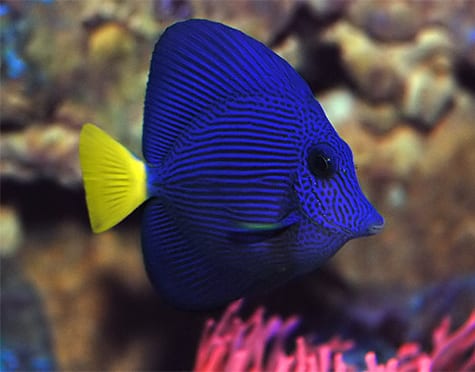 The Purple Tang is also known as the Yellowtail Sailfin Tang, and was formally known only to the coral reefs of the Red Sea, but it is now found in the Arabian Sea, the Gulf of Aden and in the waters off Sri Lanka as well. It usually lives singly, but can occasionally be found in schools in the southern Red Sea.

Requirements
If housed properly, it is a rewarding and attractive addition to any large fish-only tank, or reef aquarium. If keeping them, be sure to provide good lighting, lots of free-swimming space and plenty of potential hiding spots. They can be very aggressive and do not fare well with tank mates of similar body shape, especially other Tangs of the genus Zebrasoma.

Suggestions
It is said that the Purple Tang is one of the most prized specimens of all saltwater fish for its coloration, and one of the most popular Tangs for the reef aquarium. Furthermore, many hobbyists suggest that this Tang should be added after more shy and cautious fish have been introduced since the Purple Tang is known to become very dominant when introduced first and may show aggression towards fish introduced afterwards.

Feeding
Although Tangs will eat meaty foods along with the other fish in the aquarium, it is important that they are offered plenty of marine-based seaweed and algae. This will strengthen their immune system, reduce aggression, and improve their overall health. Offer dried seaweed tied to a rock or use a clip, and feed at least 3 times per week.

Find out where you can buy a Purple Tang near you