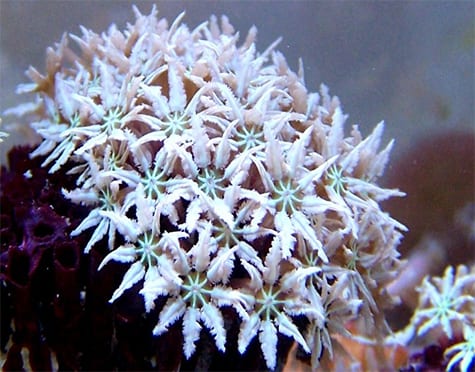 The Pipe Organ Coral holds a unique flower shaped polyp which really adds a touch of detail and colour to any marine aquarium. It should also be noted that the Pipe Organ Coral is actually a soft coral even though it is often referred to as a hard coral due to its red skeleton structure.

Requirements
This coral is a great addition to any reef tank due to the fact that it has a peaceful temperament and can be placed anywhere in the aquarium due to not having any sweeper tentacles that can sting neighbouring corals. In order to thrive it will require a moderate to high light intensity and a moderate to high water flow.

Suggestions
It is also a viable decision to add trace elements into your water when housing this coral in order to maintain its good health, for example calcium and strontium.

Feeding
Though this coral will attain the majority of its nutritional requirements from the lighting through photosynthesis, it will also benefit from additional food sources in the form of brine shrimp or micro-plankton.

Find out where you can buy Pipe Organ Polyps near you