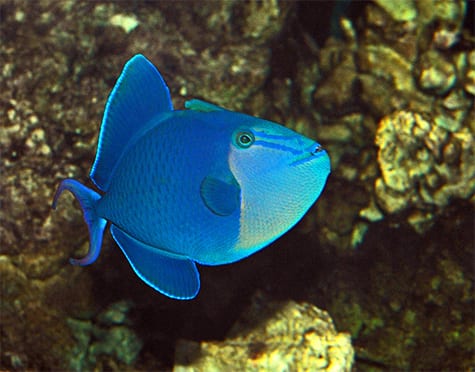 The Niger Trigger is most certainly a very impressive fish for the home aquarium as it holds physical attributes alike no other fish. The colouration of this fish varies greatly, and range from blue, green to purple. This fish also holds a striking electric blue highlight on the tail lobes and fins, which really makes it stand out. As this fish matures into a fully grown adult, it will develop into a darker purple colour with a lighter blue or green highlight around their face, and will even develop bright red teeth.

Requirements
This trigger requires a 500 litre or larger tank that includes a variety of liverock and caves. However, it should also be noted if this fish does not like the current rock work in your tank it will almost certainly rearrange the rock itself. This fish should not just be purchased without researching beforehand, as it needs to be housed with other aggressive or large fish to stop it from bullying any peaceful fish.

Suggestions
This fish is extremely territorial and if planning to home, it needs to be the last fish added. As once it has discovered its territory, it may be very aggressive and defend the tank from new tank members. Additionally, the Clown Trigger will erect its dorsal spine when impressing an opponent or as a defence mechanism.

Feeding
This fish most certainly needs to be offered a wide range of meaty foods. These can range from small fish, shrimp, squid, clams and hard shelled foods to grind down their ever growing teeth.

Find out where you can buy a Niger Trigger near you