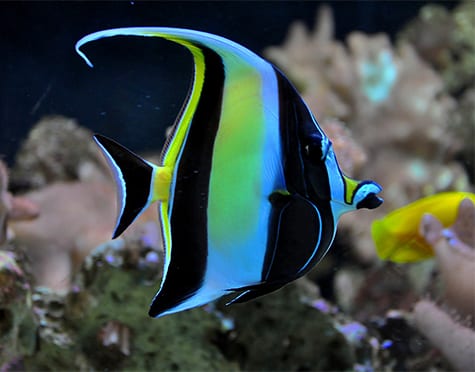 The Moorish Idol is native to the Indian Oceans and Red Sea. This is an amazing fish that really holds a unique appearance that cant be missed. It has a elongated dorsal fin and nose that is really like no other fish. Its body is also dressed in white and black vertical stripes with the far back white stripe and middle stripe having smudges of yellow that really make it stand out. Though this specimen can grow up to 7-8 inches in the wild, in captivity it is extremely rare for it to ever surpass 4 inches.

Requirements
The Moorish Idol has a very peaceful temperament and will very rarely become aggressive towards other tank mates of different specimens. In order to keep this fish in a comfortable environment it will require a aquarium of at least 400 litres, preferably with lots of live rock for hiding in and lots of swimming space. Unlike some other butterfly fish the Moorish Idol is usually not harmful towards invertebrates, however may cause issues towards some corals.

Suggestions
Among the marine industry, this fish has the reputation of being a difficult fish to keep happy and should only be housed by those more experienced hobbyists. This is merely due to the fact that it can be challenging to feed.

Feeding
The Moorish Idol will most likely be extremely difficult to feed upon purchase and will take some time to settle down into a normal feeding pattern. Initially it is a good idea to make sure your aquarium has a lavish supply of algae and sponges for it to nibble at until it starts to gain confidence to eat other meaty foods.

Find out where you can buy a Moorish Idol near you