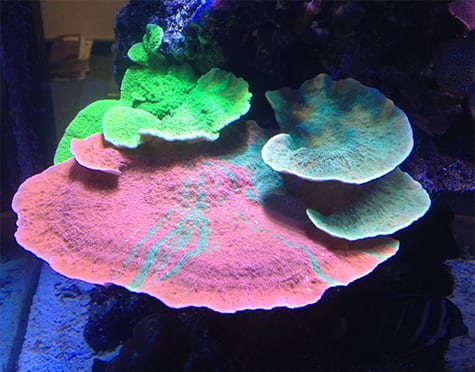 It is not surprising as to why the Montipora coral is one of the most sought after corals in the SPS range, as it hosts a variety of amazing colours and some hold a unique plating overhang styled structure that will add diversity to any marine tank. In addition to the plating form there is also an encrusting structure whereby the Montipora will simply develop itself and grow onto a piece of live rock, both look just as amazing as the other when fully settled into the home aquarium and held under the correct conditions.

Requirements
This is probably one of the most wanted corals as it is one of the true aspects of making the home aquarium look like a real reef in the wild. Additionally, it can be added close to other Montipora and they usually converge together as they develop, creating a unique bi-coloured coral.  However, this coral is not easy to look after and many hobbyists have issues in creating the environment they need to really thrive. It is important to make sure your aquarium has moderate to high lighting and moderate to high water flow in order to reiterate its natural environment.

Suggestions
For continued good health, it will also require the addition of calcium, strontium, and other trace elements to the water. The Montipora can thrive under a variety of lighting conditions from LEDs to T5's or halides, however it is important to monitor how the coral is doing and alter its position in the tank in order to meet its needs.

Feeding
Though this coral will attain the majority of its nutritional requirements from the lighting through photosynthesis, it will also benefit from additional food sources in the form of micro-plankton.

Find out where you can buy a Montipora Coral near you