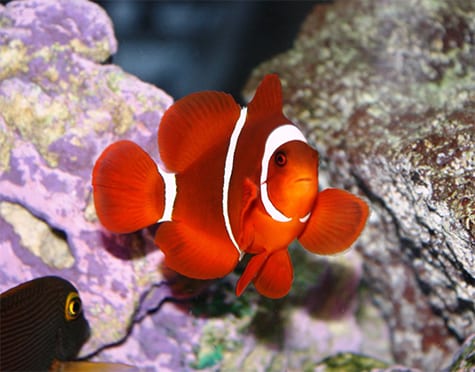 Suggestions
Many suggest that the Common Clownfish is also easy to breed in the home aquarium. The females will be the largest of the pair and the two fish will usually stay close to each other in the aquarium. The Clownfish will deposit the eggs on a flat surface and defend the eggs from other tankmates. The eggs will normally hatch in 6-11 days depending on the water temperature. Also individuals have suggested that you should not move the Maroon Clownfish with a net as its cheekspines will become entangled. Use a specimen container if capture is necessary.

Feeding
This Clownfish is an aggressive eater. It will accept most meaty foods and frozen herbivore preparations.

Find out where you can buy a Maroon Clownfish near you