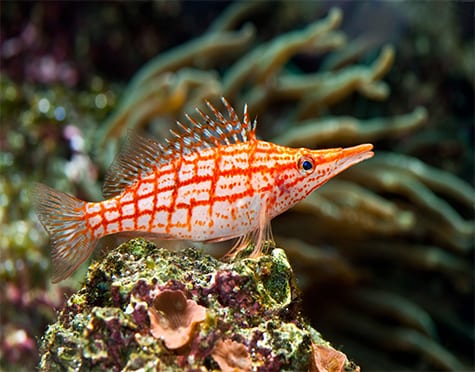 The Long Nose Hawkfish, has a very unique personality and enjoys hopping around the tank and perching on rocks in a remarkable manner rather than continuously swimming around.  This fish holds a peculiar body shape with a thick boy and elongated nose. Its colouration consists of a white base with a net patterned array of red/orange lines, which really makes a eye catching fish.

Requirements
This fish requires a tank of at least 100 litres in volume, preferably one with a variety of live rock structures for hiding in and perching on. This is a very peaceful fish and will spend most of its time hopping along the sand bed and perching on top of rock. However, as they are bottom dwellers they may have squabbles with other bottom dwellers such as gobies and blennies when trying to protect their territory, however other than that they are very peaceful fish.

Suggestions
These fish have great personalities and look amazing in reef aquariums as they really do add a unique hint of colour which is hard to find in other marine fish. It is also a good idea to house it with other peaceful fish in order to prevent it having to compete heavily for food.

Find out where you can buy a Longnose Hawkfish near you