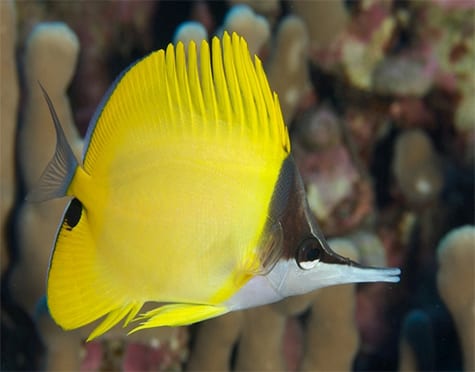 The Longnose Butterfly has a elongated nose, which is effective for hunting small amounts of food in holes and crevices within live rock. This fish can be discovered within the reefs of the Indo-Pacific Ocean and though it is usually found singularly it can also be found shoaling with others. The Longnose Butterfly has an eye catching appearance formed by its vibrant yellow body and its black and white face which is divided horizontally. Additionally,  the Longnose Butterfly holds upper dorsal spines that can be used as a defence mechanism when threatened.

Requirements
It is said that this fish thrives best when kept in a large reef aquarium of at least 400 litres. This is because this is peaceful fish that can be a slow eater, and aggressive and active eaters can scare this shy fish and make it hard to feed. Additionally, it is best to keep this fish as the only butterfly in the tank to stop any competitive aggressive behaviour between the two.

Suggestions
Many have suggested that this is the slowest growing butterfly among its family, and will never surpass about 6". Additionally, it may nibble anemones, feather dusters and invertebrates, so it is trial and error in regards to housing this fish in a reef tank.

Feeding
Many state that it takes a while at the beginning to get this fish to feed due to it being shy and slow. However this can be overcome by trying a variety of live foods such as brine shrimp or copepods, and then slowly moving over to frozen meats and other foods as it settles in.

Find out where you can buy a Longnose Butterfly near you