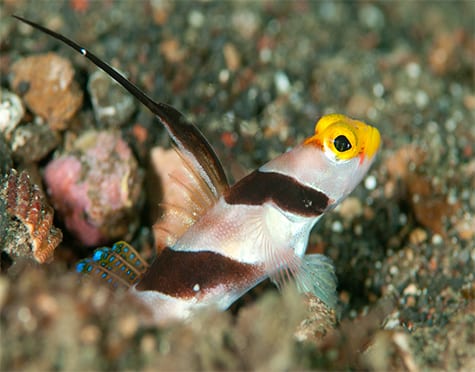 The Hifin Goby has a body with a silver colouration and a vibrant yellow face with a distinctive set of black diagonal stripes across its body. This fish is very desired in the aquarium industry as its known to form a symbiotic relationship with a pistol shrimp. Many hobbyists have stated that if added together the goby and the shrimp will pair up almost instantly.

Requirements
To create a comfortable environment for the Hifin Goby it should still be kept in an aquarium of 30 litres or more, preferably with a range of live rock and a sand bed. This goby is known to be a very peaceful fish when they are of a different family or shape, and even share caves and burrows with other fish, however if housed with too many fish in a aquarium too small it may begin to fight with others.

Suggestions
The Hifin Goby is known to be an avid 'human water' and is usually seen perching only its head out of a cave and keeping an eye on what its owners are up to. If this fish has been paired with a pistol shrimp, it can be one of the most interesting things you can watch in an aquarium.

Feeding
The Hifin Goby's diet must be fed on a range of meaty foods such as brine shrimp, frozen mysis shrimp, and forms of frozen preparations.

Find out where you can buy a Hifin Goby near you