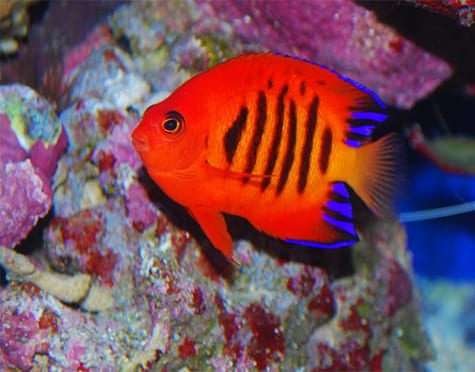 Requirements
The Flame Angelfish requires at least a 300 litre aquarium with lots of hiding spots and live rock for grazing upon. This fish is not a common reef inhabitant, as the Flame Angelfish is usually found to nip at clam mantles and stony and soft corals. Additionally, it should also be noted that the Flame Angel is especially susceptible to those higher levels of copper, and as a rule of thumb should never be housed in a tank with copper levels above 0.15 ppm.

Suggestions
The Flame Angelfish has been said to usually adapt extremley well to a tank enviroment, however should be housed in only those established system and kept with dissimilar tank mates. Additionally, the Flame Angelfish is hermaphroditic, and therefore is  extremely difficult to breed in the home aquarium, additionally differentiating males from females is a challenge as there are no distinctive attributes to separate them

Feeding
The Emperor Angelfish should be fed a diet of mysis or frozen shrimp, marine algae, spirulina, and other meaty items.

Find out where you can buy a Flame Angelfish near you