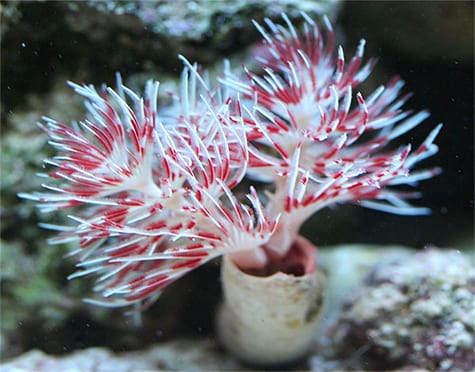 The Feather Duster is definitely a unique addition to the home aquarium, and hosts an admirable fan-shaped crown that varies in colouration, from orange to tan with dark bands. Feather dusters can vary greatly in size, though they can grow exceedingly large in the wild, it is not uncommon to see 7 inch specimen in captivity.

Requirements
The Feather Duster is most commonly discovered among the sand bed or coral rubble in the home aquarium. In order to keep this amazing creature thriving in captivity, it will require a well established reef system that holds a flourishing amount of plankton to which the feather duster will filter through. Additionally similar to all invertebrates it should not be in a aquarium with elevated copper levels or copper treatment should not be used on a tank containing this specimen.

Suggestions
The Feather Duster uses its fan to fan into the water and filter out microscopic foods and organisms, which it then relocates to its mouth which is at the center of the fan. Its fascinating body is protected by a tube that acts as a form of armour. To which when any disturbances occur it will instantaneously dart back into the tube for protection.

Feeding
The Feather Duster will most likely be content with filtering out food in your aquarium, but if there is an insufficient amount present then it is important to feed them. They can be fed with a variety of food sources such as liquid phytoplankton.

Find out where you can buy a Feather Duster near you