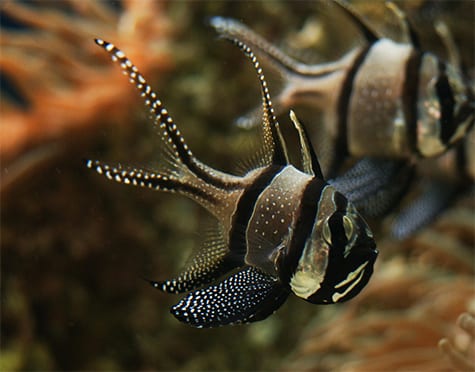 The Emperor Cardinal, also known as the Banggai Cardinalfish, is definitely connotes a flamboyant appearance. Its body is silver and covered in white dots, whilst also having black vertical stripes from fin to fin. Similar to the clownfish, this fish has been actively bred very successfully in the home aquarium.

Requirements
This unique fish is not very active  and you can get away with homing it in a 40 litre tank size or more. It is a slow and patient swimmer and therefore should not be kept with the more aggressive classed fish. However, it has been known to have a aggressive behaviour towards the same species if kept in larger groups, the most they should be kept at is maybe 3-4 in order to eradicate this issue.

Suggestions
These fish are relatively easy to breed in the home aquarium when housed in the correct conditions. During this process the male will carry the eggs in its mouth to protect them once the female as spawned. This can be an amazing process to witness.

Feeding
The Emperor Cardinal must be offered a variety of meaty foods, such as brine and mysis shrimp, but also thrives on pellets and flakes.

Find out where you can buy a Emperor Cardinal near you