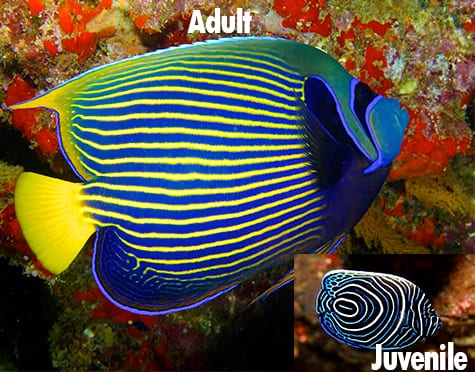 The Emperor Angelfish, also called the Imperator Angelfish, the adult form has a fearless, blue body covered with bright yellow horizontal stripes crowning in a yellow to orange caudal fin. Whereas, the juvenile form is black with circular blue and white stripes beginning from the tail.

Requirements
The Emperor Angelfish requires a 600 litre or larger tank with live rock for hiding and grazing on. They also require a vast amount of rock-work and deep tunnels and caves to hide in and feel safe. This angel may will nip at clam mantles and both soft and stony corals, however hobbyists have known them to be safe with small-polyped stony corals.

Suggestions
It is said that the Emperor Angelfish usually becomes the 'king' of the tank once added and will behave dominantly towards other fish. The transformation of the angelfish will vary in coloration and pattern as it adapts from juvenile to the adult.

Feeding
The Emperor Angelfish should be fed a diet of mysis or frozen shrimp, marine algae, spirulina, and other meaty items.

Find out where you can buy a Emperor Angelfish near you