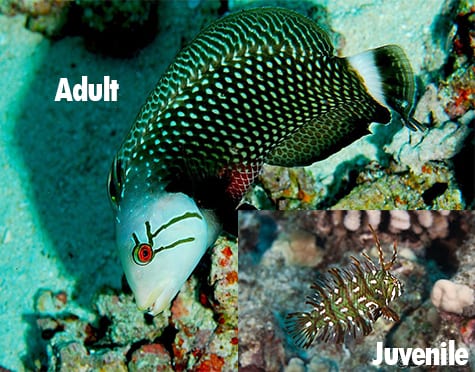 The Dragon Wrasse is also known as the Rockmover Wrasse, and the adult and juvenile colourations vary greatly to almost unrecognisable. This fish can be discovered in the oceans of Fiji and Huwaii usually hiding amongst the rocks.

Requirements
The Dragon Wrasse should be kept within an aquarium with at least 300 litres and a 2 inch sand bottom in order to satisfy its behaviour of covering itself in the sand when sleeping and protecting itself. Additionally, it has been said that it is vital to have a covered aquarium as these fish can be avid jumpers.

Suggestions
Many hobbyists suggest that Dragon Wrasse may be kept with fish that are larger or more aggressive than it is, but should be kept housed with more passive fish as a juvenile, and should also be kept individually and never with another Dragon Wrasse. Furthermore, this wrasse should not be kept in a reef aquarium as it is not only known to eat invertebrates as it matures, but also rearrange corals and rocks in the aquarium in order to hunt for food.

Find out where you can buy a Dragon Wrasse near you