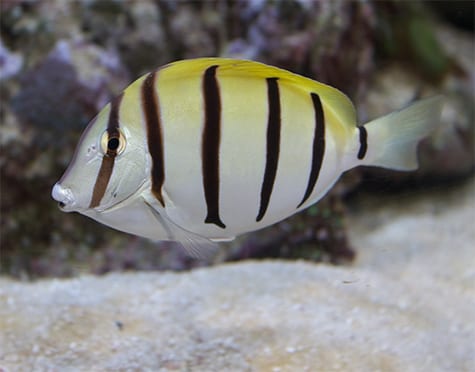 Find out where you can buy a Convict Tang near you

The Convict Tang has a wonderful silver/white body painted with six black verticle lines. When comparing them to other tangs, its clear that Convict Tangs has relatively small peduncle spines, which definitely give them a unique characteristic which is difficult to find elsewhere. This tang not only adds a unique colouration to any reef for fish only tank but also has a great personality that many hobbyists adore.

Requirements
The Convict Tang should be kept within an aquarium with at least 400 litres as it can reach a standard length of 8 inches.Though it will live peacefully with other Convict Tangs, some have known the Convict Tang to harass other species of Tangs, however this aggressive behaviour usually ends after a few days as long as the tank has a suitable capacity.

Suggestions
Many hobbyists suggest that the Convict Tangs are extremley difficult to breed in the home aquarium due to the fry being very susceptible from being sucked into the filtration since they stay in a planktonic state for months. Additionally, these tangs have no alternating sex atributes that allow for disguishing between male or female.

Feeding
Their diet should consist of meaty foods, such as vitamin enriched frozen bring shrimp or mysis shrimp as well high quality marine pellets, flakes and not to mention offering plenty of marine based seaweed and algae to improve their overall health, reduce aggression and strengthen their immune system.