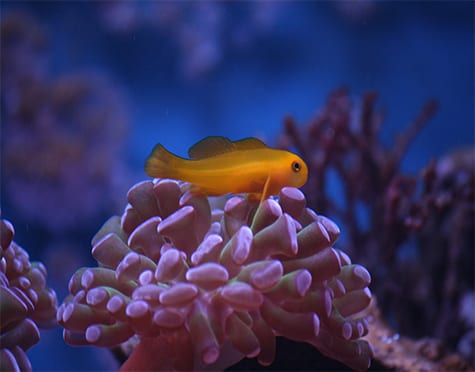 The Clown Goby is a joyful addition to all aquariums, it offers a great amount of colour and personality in a small package. Its body is vibrant yellow throughout, and is often found perching on corals and live rock. Additionally, this is an amazing addition to those smaller aquariums where size means everything, as this fish grows to a miniature 1.5".

To create a comfortable environment for the Clown Goby it should still be kept in an aquarium of 30 litres or more, and one with live rock and corals to satisfy the gobies behaviour to perch. Furthermore, this fish is almost never seen being aggressive to other tank mates, however has been known to fight with its own kind.

Suggestions
Many hobbyists have been known to have their Clown Goby spawn in their aquarium when housed in a comfortable environment. This must be noted because, if the female lays its eggs on the branch of a coral, such as an acropora, it may cause the coral to recede. So it is a good idea to keep an eye on the Clown Gobies and corals to make sure no adverse issues occur.

Feeding
The Clown Goby's diet must be fed on a range of meaty foods such as brine shrimp, frozen mysis shrimp, and forms of frozen preparations.

Find out where you can buy a Clown Goby near you