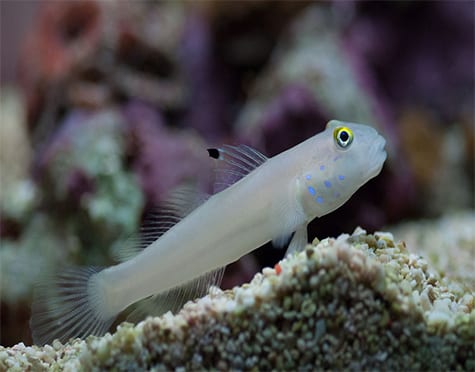 The Chalk Goby is one of the most popular goby's and is usually wanted due to its mannerisms in consistently filtering through the sand bed and cleaning up hobbyists tanks. It has a solid white body with electric blue spots from beyond the gills to the eyes.

Requirements
In order to home this fish successfully and keep it happy and healthy, it must be housed in an aquarium of at least 60 litres with sand as the substrate as the goby will spend most of its time sifting through it. Additionally, a tank cover is a must when housing this fish, as it has been known to accidentally jump up and fall out of the aquarium.

Suggestions
Like other Gobies, the Chalk Goby will perch on live rock, hide in caves, hop across the substrate, and sieve through sand. The goby is a very peaceful fish when they are of a different family or shape, however if housed with another fish of the same family and shape it can show signs of aggression towards it in order to hold its territory and dominance.

The Chalk Goby will feed itself through sifting the sand bed and eating the algae and foods found within the sand. This also proves to be a great way of keeping your sand bed oxygenated, and eradicated nitrates being stores under the sand. Additionally, this fish will feed on a selection of frozen meats such as brine shrimp, mysis and other live foods.

Find out where you can buy a Chalk Goby near you