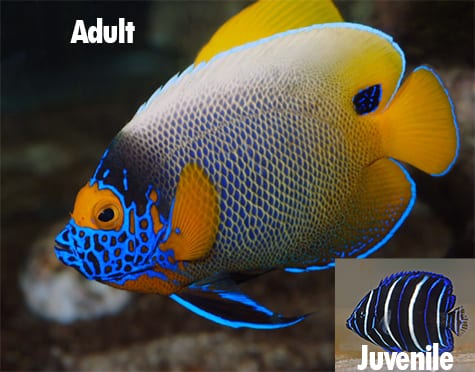 Commonly referred to as as the Blueface, Yellowface, or Yellowmask Angelfish, the colouration alternates greatly from juvenile to adult. The juvenile form consists of the body being covered in altering vertical stripes of white, black, and blue.

Requirements
To offer a good environment for this fish, a minimum of a 600 litre tank with a variety  hiding places and large amounts of live rock for grazing should be met. This fish is a uncommon reef dweller in reef aquariums, as the Blueface Angelfish is prone to nip at clam mantles and both stony and soft corals.

Suggestions
It is said that the Blueface Angelfish is best kept as the only angelfish in a tank, this is because it commonly becomes very territorial when it is the largest fish in the aquarium. However some have also had success in keeping many angelfish in the same tank, though caution should be taken when adding multiple angelfish in terms of their introduction timing.

Feeding
The Blueface Angelfish should be fed a diet of mysis or frozen shrimp, marine algae, spirulina, and other meaty items.

Find out where you can buy a Blueface Angelfish near you