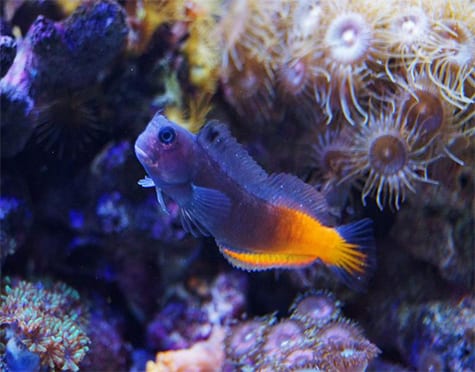 The Bicolour Blenny attained its name through having a body that consists of being blue on one side and orange on the other, and therefore most certainly add a great bit of colour to all marine aquariums. The sex of the fish can be identified by the size of the blenny, as the males will generally be larger than the females and have a slightly different colouration. This fish has loads of personality and is a very active, peaceful and overall fun marine fish to observe and add to your home aquarium.

Requirements
This fish is almost always found within live rock crevices and perching on rocks, and therefore it is important that this fish is added to a tank that has a good amount of rock to satisfy the blenny. As a rule of thumb a tank size of at least 60 litres should be sufficient.

Suggestions
The Bicolour Blenny is a very peaceful fish when they are of a different family or shape, however if housed with another fish of the same family and shape it can show signs of aggression towards it in order to hold its territory and dominance. Additionally, the Algae blenny has been known to nibble on some SPS corals and clam mantles, but many argue that they are simply eating the algae in between the polyps. However, it has also been said that if this problem exists, then if you move to a bigger aquarium it will be eradicated as the fish will be consistently involved in adventuring around the rock of a larger tank.

Feeding
In addition to the macroalgae already in the aquarium, this fish will also do well if you add forms of vegetation into the tank. This can be a variation of spirulina, seaweed and algae pellets.

Find out where you can buy a Bicolour Blenny near you