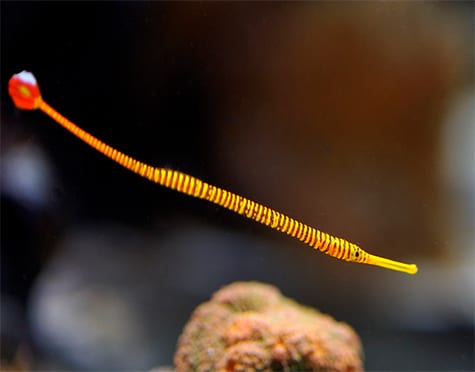 The Banded Pipefish is a relatively weak swimmer when compared to most other marine fish, however is still a better swimmer than its cousins in the seahorse family. When in its natural environment this fish will usually be discovered scavenging under corals and rocky overhangs.

Requirements
This pipefish is most certainly for those more experienced in the hobby of marine keeping as it is more difficult to feed and keep happy in a home aquarium. This fish thrives on consuming live copepods, so suits those aquariums which are full of live rock and are enriched with macroalgae and copepods. Additionally, it is wise to also add live baby brine shrimp to the tank on a regular basis to allow them to hide around the tank inside of live rock and other crevices which will keep the pipefish scouting around the tank and eating. Overtime, many have had success in getting the pipefish to move onto frozen food as their main diet, which usually includes mysis, cyclops and nutramar ova.

Suggestions
Pipefish are usually kept in their own aquarium or one set up uniquely for them. However, many have had great success still with keeping them with other peaceful tank mates such as; seahorses, dragonets, small gobies and firefish. Also some corals can be harmful to seahorses, as their stinging tentacles can cause damage and even sometimes consume the pipefish if the corals are big enough. Furthermore, crabs and clams may also cause damage to your pipefish and grab and pinch them if they are housed together.

Feeding
It is important to only have pipefish housed with fish that will have the same eating patterns as them and not be aggressive and quick eaters and leave the pipefish with nothing to feed on. Pipefish will feed well on many frozen meats, however most aquarists say that mysis shrimp is always their favourite to eat. It is also a good idea to add foods such as amphipods and other small crustaceans to the tank in addition to what is already found on the live rock. Lastly, as a rule of thumb it is said that pipefish do best when fed twice per day.

Find out where you can buy a Banded Pipefish near you