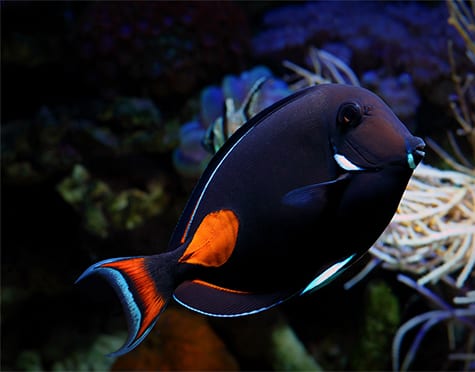 The Achillies Tang, also known as the Achillies Surgeonfish, has been classed as one of the most expensive but yet striking fish on the market today. Its colourings are nothing like any other fish in the ocean and can draw attention to any aquarium it inhabits.

Requirements
A 180 gallon aquarium or larger is necessary to provide plenty of swimming room,and these fishes require strong water flow as they are normally found in surge zones. It can be aggressive towards other Tangs, but peaceful with other fish.

Suggestions
It is said that the Achillies Tang is one of the most prized specimens of all saltwater fish for its coloration, and one of the most desired Tangs for the reef aquarium. Furthermore, many hobbyists suggest that this Tang should be added after more shy and cautious fish have been introduced since the Achillies Tang is known to become very dominant when introduced first and may show aggression towards fish introduced afterwards.

Feeding
Although Tangs will eat meaty foods along with the other fish in the aquarium, it is important that they are offered plenty of marine-based seaweed and algae. This will strengthen their immune system, reduce aggression, and improve their overall health. Offer dried seaweed tied to a rock or use a clip, and feed at least 3 times per week.

Find out where you can buy a Achillies Tang near you